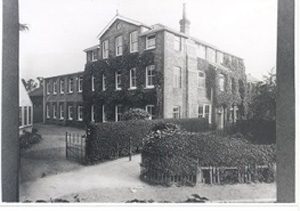 This double page spread (right) from a 1921 memoir of the Ash Company not only illustrates the “advanced class of work” the Walton factory produced but also the level of elegance and detail that the dental industry demanded of its products.

The Walton site went through its last company transition in 1924 when it became a factory of the Amalgamated Dental Company – one of the world’s leading dental production companies.

Mr. Stan Patto managed the company for a time and was based locally. Elmbridge Museum’s collection of dental tools dates from Patto’s directorship.
As examples of a specific trade, the items on display are fine illustrations of the day-to-day tools of dentists. However, when viewed more broadly, Patto’s rich collection helps clarify and explain industrial processes in the mid-twentieth century.

Dental chair produced at the Walton factory, 194 Unfinished tools, such as the brass handle shown here, demonstrate the production-line type processes that these tools went through. This handle has not yet been turned which would allow attachments to be changed for differing needs.

Other tools in Patto’s collection show us how tools would have been transported while keeping them bacteria-free. Unbroken wax protection still clings to stainless steel probes, such as the example shown above. Wax is air tight, meaning tools can be transported from factory to practice while remaining sterile.

The high level of craftsmanship, noted in the Ash Company’s 1921 memoir, continued from opening to closure – attention to detail and finishes was evidently important within the Walton factory. The imprinted detail on the handle of this tool shows a high level of craftsmanship. Experimental finishes and prototype tools – such as the one below – moved beyond design stages and were produced at Walton. 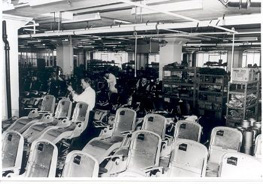 The Wellington bomber, designed in nearby Weybridge, is considered one of the most versatile war planes ever flown. Parts from the Walton factory helped Surrey produce up to 70 Wellington bombers a month.

Many European dental factories were destroyed during the War. With increased demand and limited supply in Europe, Walton saw a huge increase in dental instrument orders when the war ended.

However, a lack of available workforce and long turnaround times meant that initial orders could not be met and new orders never materialised.
To increase income, the decision was made to manufacture larger, more expensive equipment. Chairs, the very item Walton was once famed for, may have been the factory’s downfall. Below are some photographs of Walton-made chairs: a finished 1948 example and a 1967 production line.

Again, this enterprise was not wholly successful and in the 1970s the decision was made to close the factory. The gates were closed for the last time in 1981.

It is very interesting to note that dental chairs – from the decadence of the 1920s that gave Churchfield Road its reputation; through to extremely simple, collapsible field chairs helping the war effort; and the swathes of mass-produced 1960s examples – chart the three main periods of the factory’s life.