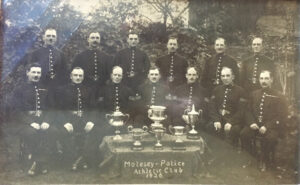 The estate remained in royal ownership until 1630 when it was given away by Charles I to Dudley Carleton, Viscount Dorchester and later Baron of Imber Court. Carleton died in 1631 and Imber Court was inherited by his nephew, also Dudley Carleton. Carleton engaged Inigo Jones to design a new manor house, which stood until 1919 when it was demolished.

In respect of recent history, the land was purchased in 1919 with the original purpose of providing a training centre for the Metropolitan Police Mounted Branch which is still here. However not all the land was required and in the early 1920’s much of the land and meadows were turned into playing surfaces with monies that police officers donated themselves. A donation from The National Police Fund (Charity) also paid for the building of the main clubhouse.

The current clubhouse was built in 1929 by public subscription, and was ‘officially’ opened on 11th June that year by H.R.H. Prince George and has operated as a sports and recreation facility since then serving not only Police Officers and their families but also many families from our local community (at our last count this numbered over 600 local residents).

Overnight accommodation was provided for Police Officers in training. Police officers from all over the world have been trained at Imber Court with the regular intake of recruits. It was here in 1971 that WPCs Margaret Goodacre and Ann McPherson were to make history as the first women police officers to join the Mounted Branch. Imber Court today has facilities for the training of both horses and officers. It also houses a small museum documenting the development of the Mounted Police and is the administrative centre for the Mounted Branch.

Over the intervening years the Club has operated (as it still does today) as a non-profit making facility. This means any profits made (through our commercial activities) are always ploughed back into the Club, enhancing the facilities for all its users.

Whilst Imber Court was the sports club of the Metropolitan Police, today it is open for everyone to join and enjoy our fantastic facilities. We have a Police Heritage which we are proud of. We are equally proud that for the last 100yrs we have been part of this local community. As we rapidly approach membership number 10,000 and celebrate our 100th birthday, it’s hard to imagine another local resident being here longer. If there is, we would love to meet them!

Our Gym offers training and fitness advice from qualified instructors, our swimming pool not only provides leisure and lane swimming, but also Aqua classes and swimming lessons. Our instructors have been teaching children and adults to swim for 20 years, many of whom return to the club to teach the next generation.

For the less energetic we have grounds intertwined with sports pitches that offer scenic riverside picnic areas where you can forget you are on London’s doorstep. Our Sports bar and Restaurant offer refreshment for those who have worked up a thirst or appetite or for those who just wish to indulge.

We hold an eclectic mix of social events: An Abba 70’s night to get everyone up and singing, a Night at the Opera dining to Opera D ’amici singing surprisingly familiar songs, our Christmas and New Year’s Eve parties and our children’s pantomime.

If you have never been to Imber Court before, please pay us a visit. You may be surprised by what you see. We are so much more than just a sports club.