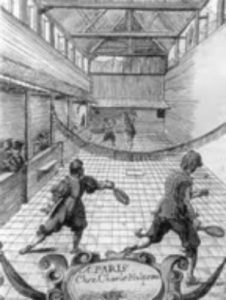 Real Tennis, aka “The Sport of Kings”, was the original racquet sport and precursor to the modern game. Its popularity grew quickly among the French nobility.

The French King, Francis I (1515-47), was an enthusiastic player and advocate, building many courts and bringing the sport to a broader populace.

Henry VIII (1509–47) of England enjoyed playing the game so much that he had a tennis court built at the Royal Palace of Hampton Court in 1530The first tennis court at Hampton Court was built for Cardinal Wolsey, between 1526 and 1529.

As a young man, Henry VIII was a keen and talented tennis player, who spent hours on court. His second wife Anne Boleyn was gambling on a game of tennis when she was arrested to be taken to the Tower of London. She even complained that she couldn’t collect her winnings!

In 1519, the Venetian Ambassador wrote: ‘it was the prettiest thing in the world to see him play; his fair skin glowing through a shirt of the finest texture’.

There has been a tennis court on this site since 1625, when this one was built for Charles I. Three of the walls of the court in use today are 17th-century, with the other being Cardinal Wolsey’s original.

One of the first English guides to tennis in 1553 claimed that ‘this game has been created for a good purpose, namely, to keep our bodies healthy, to make our young men stronger and more robust, chasing idleness, virtue’s mortal enemy, far from them and thus making them of a stronger and more excellent nature’.

The game of real tennis is played in a court divided between the service end and the hazard end. ‘Hazards’ include the grille window and the winning gallery. Players at the hazard end lost the point if the hazards are hit.

For a long time the word referred only to what we would now call real tennis (real here meaning royal rather than not fake. Tennis comes from the French tenez, meaning “hold!”, “receive!” or “take!”—a call from the server to tell the opponent that they’re about to serve. Lawn tennis wasn’t invented until 1873, by a retired Welsh army major, Walter C. Wingfield, who wanted something new to entertain guests at his garden parties.

However, the game is safer. Since the 1500s the balls have been made with leather and filled with soft stuffing, which included animal and human hair. Before this, balls were more like ammunition, filled with clay, sand and powdered egg shells and could take out an opponent with a single hit!

Henry VIII would recognise a game of real tennis if he saw it today: it has changed little since he enjoyed it. The equipment is still hand-made on the tennis court site, as it has been for nearly 500 years.

During the 17th century various improvements were made to the court. One of the first acts of Charles II after his restoration in 1660 was to order the extensive refitting of the Tudor tennis court. This included the laying of a new tile floor, the remodelling of the galleries and repairs to the roof.

At the same time, new nets, curtains and velvet cushions for the spectators’ seats were provided. The interlaced initials above the net on the wall opposite the corridors are, however, not those of Charles but of William III and Mary II (1689–1702). Since the end of the 17th century the court has undergone little alteration. However, progress is not incompatible with history: in 1975 sodium halide lighting was installed

Although the game looks like a strange mixture of tennis and squash, the techniques, strategies and rules are both more difficult and more complex than those of the modern derivatives