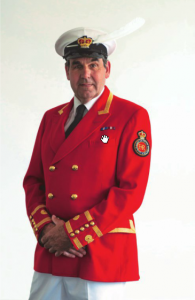 One of the beautiful spectacles on the Thames is the tradition of swan upping. So, have you seen it? If not, it is really worth seeking it out this July.
Swan Upping dates back to the 12th century. In medieval times the Crown claimed ownership of all mute swans which were of course considered rather a delicacy at banquets. Today the Crown still claims ownership of all unmarked mute swans in open water, but exercises this right on certain stretches of the Thames. Thankfully the swans are no longer destined for the table!

Today the exercise is to monitor the health of mute swans on the Thames and collect data about numbers to ensure their numbers are maintained. The cygnets are caught, weighed, measured and ringed. The adult birds are checked for any sign of injury, sadly often caused by fishing lines and hooks.

The Queens’s swan marker is accompanied by the Vintners’ and Dyers’ Livery companies, the former in red and the latter in blue. They use traditional rowing skiffs.

This year they will pass through Shepperton Lock at 10.45 and from Penton Hook Lock at 12.30. If you have not seen them before it really is worth going down to have a look and be sure to take your camera. You can see them at the Weir pub having a tipple before leaving on their traditional tipple before setting off on their 5 day journey upstream to Abingdon.

If a swan is found to be injured at Swan Upping it is admitted to care at Swan Lifeline at Eton. Details of age, parentage and usual location, can be checked out. A lot of data is collected and the swans can be monitored from one year to the next.

In 2012 the event had to be cancelled for the first time in history due to flooding on the Thames. This year however it looks fine so do get down to one of the locks near you and see them coming through. Enjoy this very British tradition in all its finery.