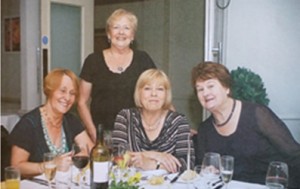 Celebrating the 50th anniversary of the Shepperton Venture Group

The Shepperton Venture Group was founded in 1962 as the Young Wives Venture Group. It provided a get- away for like- minded women who found themselves at home with young children. Initially meeting at each others houses, the group then settled in the Scout Hut in Wood Road where many happy moments were shared.
The first chairwoman was Mary Temple and she remained a member for the whole of her life. I met with current Chair Lesley Johnson, and Social Secretary Mary Archer and was shown the old photo albums from the start of the group. Included amongst the photos were odes to the club written by members:

And continuing this obvious glee at getting out of the house and away from responsibility:

On Monday nights we down our tools
And round to the hut we troop
We don’t give a damn for the old man’s tea
We girls of the Venture Group!

The hand typed programme from the early days shows a programme including a Hoover Demonstration and Floral Arrangements. There were also competitions at every meeting including for the best dressed clothes peg, prettiest hankie and prettiest sea shell. The programmes give a real sense of nostalgia, and hark back to a simpler life. Can you imagine being excited at a pretty hankie nowadays!

These days the group meets at the St John Fisher hall. Many of the old traditions have been retained; Social Evenings, Candle-lit Suppers and Theatre Evenings as well as talks and activities.

The group has provided friendship and support to each other for decades. They are connected through a common history, as well as the fact they live largely in the Shepperton Green area. The driving force behind the group when it first started was perhaps to get you away from the household chores. These days it is probably to get you out from in front of the TV!

The tradition of building up albums of photos and programmes will leave a legacy of the faces of the group. In the days when photos are increasingly stored digitally, or posted on Facebook you do wonder what future generations will have to leaf through for a hit of nostalgia over a coffee. Having celebrated 51 years you do feel that the Shepperton Venture Group will still be around to provide friendship, entertainment and fun.