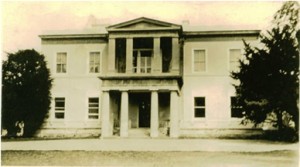 Laleham House, built in 1803 for the second Earl of Lucan. The upper porch was a later addition which has since been removed.

The second Earl of Lucan, Richard Bingham, settled at Laleham in 1803. He immediately set about building a new house to replace the original one, which stood nearer to the walled garden than the new one. The house still exists in the middle of its former grounds, now a public park beside the River Thames.
The second Earl spent little time at his new house after his marriage broke up, but it was rented for a time in 1829 to the young Queen Maria of Portugal, who was in exile from her homeland.

The third Earl was a famous soldier. He it was who passed on the fateful order to charge the Russian guns at the Battle of Balaklava in the Crimean War, which led to the ‘Charge of the Light Brigade’. His military reputation never quite recovered from his involvement in this tragic blunder, although he was later promoted to General and eventually Field Marshal!

He was also known for his bad temper and obstinate nature, and in 1843, soon after he had succeeded to the title, this led to an acrimonious dispute with the church authorities. The Earl tried to use his ‘manorial rights’ over Laleham church to completely alter the interior and replace the Norman pillars. Fortunately, he was eventually overruled.

After his death in 1888 (when he was the oldest serving soldier in the Army) he was buried in Laleham Churchyard.

The fourth Earl was altogether more community minded and gave land for the village hall, as well as an extension to the churchyard. He was a friend of the Prince of Wales, later King Edward VII, who was a frequent visitor to Laleham.

His work was continued by the fifth Earl who gave the land for the recreation ground in 1922, and was the Chairman of the village school managers for many years. He was also briefly MP for Chertsey.

The Lucan family sold the estate in about 1930, and the house became an Anglican nunnery whilst most of the lands were acquired as a public park. Although not a Laleham resident, the sixth Earl returned to the area in 1954 to open Matthew Arnold school (named after another famous Laleham resident).

In 1974 the seventh Earl famously disappeared, after the murder of his children’s nanny.

I am indebted to Oswald Adamson, writing in ‘The Laleham Commonplace Book’ for much of the above information.