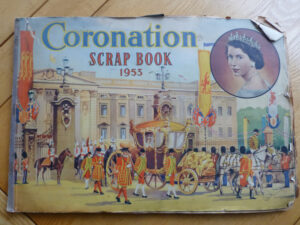 When I get to have a cuppa with some of you lovely people out there I have often been privileged to take a look at the past, to admire a treasure trove of memories left for future generations, or as a mere memento for oneself. I am talking of course of the humble scrap book.

My mother encouraged us to make up scrap books when we were little, with photos, drawings and the like. I passed the tradition on to my stepson Joe when he was 5. His book is full of a his ‘artwork’ as it progressed in style through his childhood and it is wonderful to look through that, old holiday snaps and certificates from various events he attended. It is personal to him and will revive old memories when he looks at it when he is an adult.

The oldest scrap book I have come across is from 1928, a tome of curled browning pages filled with immaculate handwriting and superb collages. Entitled ‘The Casserole: A Summer of Sunbury Scraps’. it is the story of summers spent on Wheatley’s Ait in  Lower Sunbury and belongs now with Sunbury’s Dennis Brock, whose mother was housekeeper to the holiday makers. Looking at the scrap book you could really feel the love and fun that had gone into making it. It is a fantastic piece of history.

Mary Archer of Shepperton passed on her tradition of making scrap books to her children, with her son putting together an album on Charles and Diana’s wedding, emulating the album Mary herself did for the Coronation in 1953.  In an age where so much is digital are we risking losing this testimony to times gone by? I for one still love opening a ‘proper’ photo album and having a flick through rather than looking up an album on Facebook or on my computer.

Let’s make sure we keep the tradition going and pass on the love of these very meaningful and tangible treasures to the digital generation. They will possibly only understand the true value of creating a scrap book later in life when they stumble across it and relive the memories it awakens in them.  So here is to the scrap book, a pritt stick and many happy memories for the future. Modern technology it is not, but somehow this cheap and cheerful  activity is priceless.