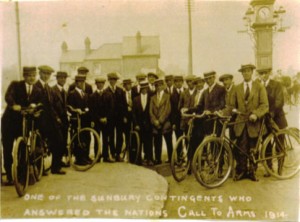 The First World War began for this country on August 4th 1914 when Britain declared war on Germany, for invading neutral Belgium. As in many other communities all over the country, the war had a profound effect on our local towns and villages.

One of the first of these effects was a large rush of men to sign up for the armed forces. Recruiting offices were opened at public buildings such as the Sunbury Council Offices, then at Church Villa in Green Street, but later moved to Sunbury Cross. By the end of the war, one in eight of Sunbury’s population had volunteered in some way. There was also an influx of soldiers however: Kempton Park Racecourse, closed for the duration of the war, became a huge army depot for motor vehicles of all types. Hundreds of men were drafted in to maintain the lorries, cars and motorcycles, which were parked all around the racecourse, apart from on the track itself.

Other arrivals were the Belgian refugees who arrived in Britain to escape the German invasion. Many were put up in local homes, including Ivy House in French Street, Sunbury.

The result of so many local men being removed from the working population soon led to the employment of women in many jobs which had traditionally been seen as the preserve of men. These included manufacturing jobs in factories and workshops, many of which had been turned over to war work. Large factories such as Staines Lino and Lagonda Cars were turned over to making artillery shells. Smaller establishments, such as that owned by inventor Sherard Cowper Coles in Thames Street, Sunbury, made wooden wings for aircraft. The hardboard factory at Sunbury Cross continued making its own product, but this was now used for lining army huts and vehicles.

The fighting in previous wars had taken place at a distance, but new technology meant that even civilian populations at home were now at risk. Airships and later bomber aeroplanes could now launch air raids on this country. One such Zeppelin raid passed over Laleham and Shepperton on 13th October 1915, although fortunately without dropping bombs on our area.

By the start of 1918, food was so short due to U-Boat attacks on merchant ships, that rationing was introduced. When an end to the fighting was declared on 11th November 1918, it was a huge relief to all, although our local war memorials bear testament to those that did not return home.