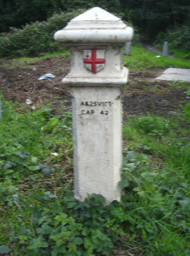 In several places in the local area, cast iron posts, about 3 feet high, painted white and carrying the Arms of the City of London, can be seen alongside roads or waterways. These are boundary markers for the Wine and Coal tax, originally introduced in 1666 to help pay for the rebuilding of the City of London after the Great Fire of that year.

The tax was levied on all coal and wine entering the Port of London. Once this useful source of revenue had been established, it was constantly renewed to help pay for other public works projects. In the Continuance Act of 1861, the boundary was redrawn to coincide with the Metropolitan Police District, and new posts set up, which are the ones we see today. They were located alongside any route by which coal might be imported (the wine tax was only ever collected in the Port of London). Besides the Arms of the City of London, they carry the legend ‘24 & 25 VICT CAP 42’. This refers to the years of Queen Victoria’s reign in which the Act was passed (i.e. 1861-62 session), and the chapter number of the Act itself.

In 1869, it was proposed to devote the revenues from the London Wine and Coal Duties to freeing bridges in the Metropolitan area from tolls.

There had been rumblings of discontent in the wider Metropolitan area, that the tax collected throughout the area was being spent on projects solely within central London. Partly to overcome this, The Kew and other Bridges Act was introduced in 1869, to enable a Joint Committee formed by the Metropolitan Board of Works and the Corporation of London to borrow £150,000 on the security of the Wine and Coal duties for 1889, and devote the proceeds to freeing some of the upstream bridges from toll. One of the bridges so freed from toll was Walton Bridge, in 1870. In the event, 1889 was the last year that the tax was collected, as it was abolished by the new London County Council.

Surviving posts can be seen locally at the end of the footpath leading to the river next to ‘Monksbridge’ in Thames Street, Sunbury, on the south side of Walton Bridge, on the Shepperton side of Chertsey Bridge, and in Thameside, Laleham, near Chertsey Lock.

‘Turner and the Thames Valley’ will be the subject of the next meeting of the Sunbury and Shepperton Local History Society at Halliford School, Russell Road, on Tuesday 21st January, starting at 8pm. All are welcome, admittance is £2 for non-members of SSLHS.