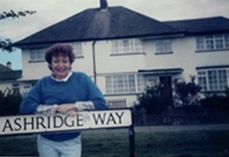 Local Eileen, in Ashbridge Way in the 1970's

Perhaps these days better known as Ashridge Way – Woodbury Close – The Vale. It is in ‘upper’ Sunbury, in case you were wondering.

When my Mother Rosina Jarvis first visited Sunbury in the Spring of 1937, there was no ‘upper’ or ‘lower’ Sunbury. Her first visit was by train from Waterloo. Alighting at the station she was directed down the unmade country lane, Vicarage Road, and made her way to the River Gardens Estate. Its entrance was guarded by an imposing pair of brick arches, with green tiled roofs. Rose had come to see a new house for rent at one pound a week. She was getting married to Albert Ross in the following September and was thrilled to find this wonderful house with all its modern features was available for her to rent. It was to be her home for nearly 50 years.

I was born at No.57 in 1940 and we all lived in Sunbury-on-Thames, never thought of us being in the ‘upper‘ part, after all that to us would have sounded posh! There was no distinction during all the time I lived there during the 1940s/50s. Everybody just said “down by the River” if one referred to any place beyond the Clock Tower at the ‘Cross’. I suppose things changed when the ‘Berg’ Estate was built and then one started to hear ‘Sunbury Village’ and ‘Sunbury Common’.

Sunbury is Sunbury, whether ‘upper’ or ‘lower’ Sunbury. I am writing a book about life on the River Gardens Estate during the 1940s/50s and have had a tremendous response so far since starting an ‘Ashridge Way’ group on Facebook and from a poster that Sunbury Library kindly let me display within the Library. Grandchildren’s memories have been coming in, it is obviously a place held in great affection by many. Any memories of those who lived there during that time, to help me record what life was like growing up on this estate, would be invaluable. Please get in touch: