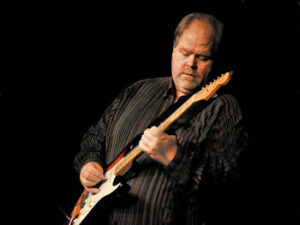 The latest in the series of Music Nights at Sunbury Cricket Club, now entering its third successful year, saw one of the best yet, as the Club welcomed back the legendary Texan blues star Buddy Whittington, who packed the Club to capacity on his last UK tour.

Once again, it was standing room only as the guitarist/singer/songwriter who was with the renowned John Mayall’s Bluesbreakers for fifteen years, produced another stunning performance. John Mayall is a notoriously demanding taskmaster, and to hold a job in his band down for that length of time is unheard of, and Mayall once called Buddy “the greatest Bluesbreaker of them all”. Buddy lived up to that reputation with a thoroughly entertaining two hours of virtuoso blues guitar and his own distinctive brand of contemporary original material.

Much of the show was devoted to his own songs, and Buddy is not content to stick with traditional blues themes – his songs range over an eclectic spectrum of subject matter, mostly social and political commentary, delivered with a sardonic and understated Texan wit that belies the depth of some of the messages. That’s not to say that he didn’t delve into the catalogue of blues standards with some carefully chosen pieces that showcased his effortless command of the genre.

Along with greats like B.B. King and Eric Clapton, Buddy doesn’t need to play a million notes a minute to make an impact – the lyricism of a few carefully chosen phrases can say as much as a frantic cascade of flying fingers, although there were plenty of effortless free-flowing solos to keep the guitar aficionados more than happy.

Ably supported by top local drummer, Darby Todd, who’s recently been working with Ronnie Wood of the Rolling Stones, and bassist Pete Stroud, Buddy brought a quality of entertainment to Sunbury that was worthy of a much bigger stage, and we are grateful to promoter Brett Todd for bringing us a show of this stature.

Friday 10th May at Sunbury Cricket Club, Lower Hampton Road
Dave’s Not Here
£5 on the door

Our copy dates fell too early to bring you news of the debut gig at the Club for top soul/funk outfit Debbie Giles & Midnight Train in April, but the next Music Night after that is on 10th May when we feature our very own Sunbury Beat Era star Karl Green, resident of The Avenue and the original bass player with Herman’s Hermits, with his current band Dave’s Not Here. They are making a return visit to the Club playing a mix of rock from four decades, and it will be another highly entertaining evening. The Hermits were so big during Karl’s career with them that they had The Who supporting them during a US tour, and Karl has a bottomless fount of anecdotes of his carousing with Keith Moon, We’re fortunate that we have stars with a history like Karl’s to present at our local Club.