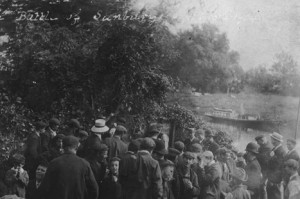 We may think of Lower Sunbury in the past as having been a sleepy place where nothing much happened, but in September 1904, an event occurred which was to attract the attention of several national newspapers. A dispute arose about access to a piece of land next to Clarke’s ferry house in Thames St, at the ‘Magpie’ end of King’s Lawn. Sunbury council claimed that the ground, which the Clarkes had fenced off, and indeed charged locals a shilling to use when watching the regatta, was in fact a public right of way.

The Daily Express reported on the 17th that the council had send along a gang of workmen to break down the fence, uproot flowers which had been planted there, and spread several tons of gravel across the site. They were resisted by Clarke’s men, who after a scuffle restored the fence, replanted the flowers, and shovelled the gravel into a cart before depositing it in the river! The paper noted that ironically Clarke’s had been contracted by the council to supply the same gravel (presumably dredged from the riverbed) at 1s 6d per ton. Early the following morning, the council tried again but were defeated: the same happened later in the day when the much-battered fence was again restored.

When the Clarke’s men took a break for lunch however, the council men took advantage, and this time succeeded in removing not only the fence, but also several chicken houses which were also unceremoniously deposited in the river!

Battle was rejoined a few days later, this time with the police standing by in case of violence, and on the 20th the Daily Mirror made much of Miss Annett, daughter of a Sunbury Councillor, who was described in somewhat exaggerated terms as ‘The Sunbury Joan of Arc’ for her role in leading the council’s forces. Indeed she tore part of the newly rebuilt fence down with her bare hands.

However by the end of the day the fence was back up again. Mr Clarke was quoted in the Mirror the following day as saying ‘As long as they pull that fence down, we shall put it up again’. By the 22nd, the Mirror was reporting that a truce was in place until the following Monday, when a council meeting was to be held to determine what to do next. By Saturday 24th, the Express reported that the large piles now driven in to support the fence were withstanding all attempts by the council to demolish it, leaving the Clarkes victorious.

This was reinforced by the 29th when the same paper stated that an injunction had been successfully taken out by the Clarkes to prevent the fence being removed, pending a resolution of the dispute. Sadly, at this point the papers seem to lose interest and no more reports were forthcoming, but it must have remained a hot topic of conversation in the village for long afterwards.

The next Sunbury and Shepperton Local History Society talk will be ‘Arts and Crafts Gardens in the South East’ at 8pm on Tuesday 19th March at Halliford School. All welcome, admission £2 for non-members of SSLHS.