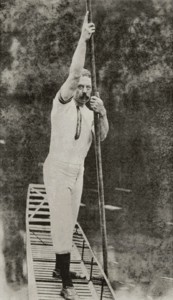 This month will see the Olympic Games open in London for the third time in history, no other city having achieved this distinction in modern times. There is a local connection with the man who was responsible for the Games being held in London for the first time, in 1908.

William Henry Grenfell, Lord Desborough (1855-1945), was perhaps the greatest all-round sportsman of his time. After excelling in sports at Harrow, he rowed for Oxford in the Boat Race in 1877 & 1878. He climbed the Matterhorn, and in 1884 swam across the pool at the base of Niagara Falls. The following year saw him part of a team who rowed an open boat from Dover to Calais. He was Thames Punting Club Champion 1888-90 and competed several times over the course at Sunbury. At the age of 50, he won a fencing silver medal in the Athens Games held in 1906.

It was at the Athens Games that, with the eruption of Mount Vesuvius that year, Italy withdrew from holding the Olympics due to be held in 1908, and Lord Desborough, who was also the official British Government representative, took up the challenge of holding them in London, with only 2 year’s notice!
The manager of the White City Exhibition, then being constructed in Shepherd’s Bush, made an agreement with Desborough that a new purpose built stadium, the largest in the world, would be built on the site at no cost to the British Olympic Committee, in return for three quarters of the ticket and programme sales.

Incredibly, the work was begun in January 1907 and completed by May 1908, 2 months ahead of the opening of the games. The cost was estimated originally at £44,000, but in the end reached at least twice that figure. Desborough had one more problem to solve: there was no money left to pay for hospitality for the visiting athletes. He wrote to the Daily Mail to request the public to subscribe, and in no time the then considerable sum of £10,000 was raised, enabling Desborough to speedily arrange a series of banquets, receptions and other events for the visitors.

The Games took place from 13th-25th July, (Winter Games also took place from 19th – 31st October) and comprised track and field events, cycling, gymnastics, wrestling, archery, fencing tug-of-war, water polo, swimming and diving (the latter in a large tank in the middle of the stadium). The opening was performed by King Edward VII, a personal friend of Desborough’s.

The 1908 Games were the first at which athletes competed as national teams rather than individuals, and introduced the parade of the teams behind their national flags. The highlight of the games was the Marathon, the length of which was adjusted to 26 miles 385 yards so that the start could take place at Windsor Castle and finish in the stadium at White City. This distance has since been used for all marathons.

Besides his efforts in the Olympics, Desborough was active in many other fields, and was at one time on 115 committees simultaneously! He was Chairman of the Thames Conservancy from 1905 to 1937, and during his time in office Sunbury Lock was rebuilt (1927), and the flood relief channel was built between Shepperton Lock and Walton Bridge (1930-35), and named the Desborough Cut. His name lives on locally, even if his many achievements have been largely forgotten.

An exhibition on the History of the Olympics, including the 1908 and 1948 London Games, will be held at Spelthorne Museum, Staines, opening on 7th July. Admission is free and the museum is entered through Staines Library.