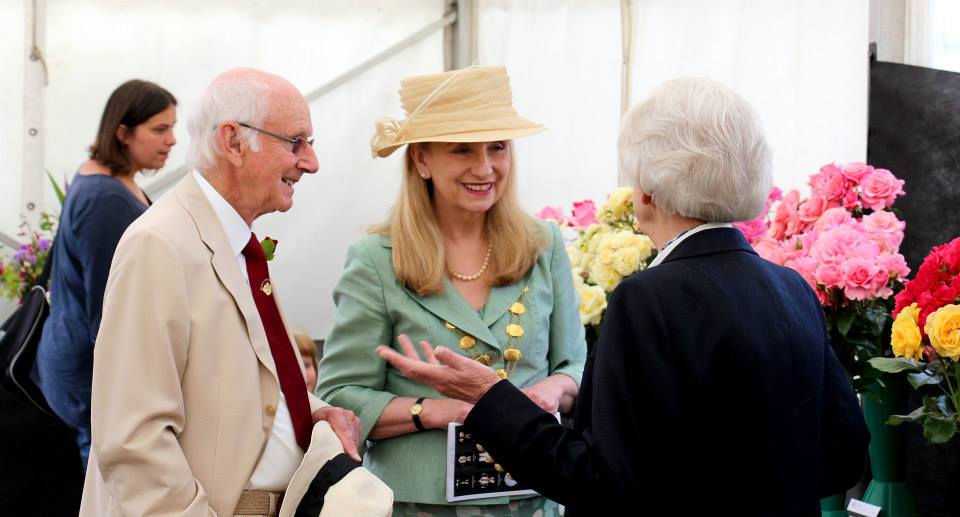 Garden and floral triumphs have been abundant in our area in the past month. Squire’s Garden Centre in Shepperton hosted this year’s Royal National Rose Society Southern Show. Shepperton was a previous location for it but in recent years it has been held at Bagshot so it was an honour to have such a high profile and quality show on our doorstep. Growers came from all over the country displaying their roses in a variety of categories.

If you missed it this year then make sure you go next time for a veritable feast of roses. At the same time, there was the annual Floral Art display in the pavilion. Visitors were asked to vote for their favourite display. There were over 500 votes cast over the weekend and the winner was declared as Hazel Turner.  Dennis van Wonderen of Van Wonderen Flowers in Lower Sunbury was awarded a Gold at the Hampton Court Flower Show. Fantastic achievement.

This follows on from his success at the Chelsea Flower Show and appearance on TV helping the budding florists in the Young Florist of the Year. Squire’s Garden Centres also enjoyed success at Hampton Court, scooping runner up in the People’s Choice Award.  The garden also won silver Flora in the show gardens category. The garden was widely praised due to the design and its relevance for urban gardens in and around London.

The most popular feature was the Living Wall. What a great way to hide an ugly wall and to make use of space.  Finally hot tub provider, HotSpring World, donated one of its hot tubs to a police officer injured in the line of duty, and featured in ITV garden makeover programme ‘Love Your Garden’ ‘Love Your Garden’ awards garden makeovers to people who have endured particularly difficult times and have heart breaking and inspirational stories to tell.

Just around the corner from Shepperton Studios is the beautiful church of St Mary Magdalene, Littleton. It was founded in… END_OF_DOCUMENT_TOKEN_TO_BE_REPLACED