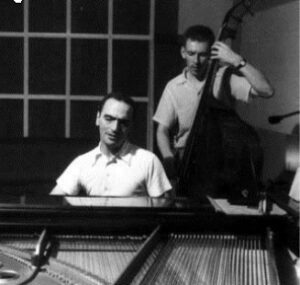 The Towpath in Shepperton is a world away from the dark, smoky atmosphere of a Jazz club, but this is where Peter Ind has settled after an adventurous life.

He left school at 14, at the start of WW2, spending the war working on a farm. It was during this time he discovered his talent for music, first piano, then double bass. Seven nights a week he was playing at dances where folk went to keep their spirits up during the war years. At that tender age Peter was earning more than his dad at the time, so thinking this was not a bad way to go, he turned professional after the war and was soon offered a job on the Queen Mary, doing the passage between Southampton and New York. In all he did 60 return journeys during his time on the boat!

Peter loved New York and settled there in the 50’s at the very heyday of the Jazz era. It was a time of celebration after the war, where ego didn’t play a part and people were happy to be alive. Peter ended up playing double bass with many greats that you would know; Duke Ellington, Billie Holliday, Miles Davies. Also many that you may not, but who are huge names in Jazz,: Lennie Tristano, Lee Konitz and Warne Marsh.

While Peter was in America he fell in love with painting and the intense blue of the skies he saw on his travels was to become ever present in his work. He described the painting he did as capturing the very energy of nature, a theme he would return to through his writing later in life.

Returning to the UK, the Jazz scene had changed. Rock and Pop were more in vogue and the live Jazz scene was not the same. Peter was undeterred however, opening a recording studio in a run down part of London called Hoxton Square. At the time it was still gritty and cutting edge. What a trend setter he was, as these days that is THE area of cool in our capital. It was the recording studio and his record label Wave Records that were the starting point, but Peter soon saw the opportunity to capitalise on his contacts and bring the Jazz greats to the UK to perform. The Bass Clef Club became THE destination for Jazz scene “…it is the most exciting and adventurous of the towns clubs” according to a 1985 review. It was also the first Afro Latino venue in London. The Bass Clef (and later the Tenor Clef) was packed every night for 10 years.

Sadly the club fell victim to the 19% interest rates of the 1990’s and Peter was forced to close, nearly losing everything in the process.  It was an amazing period in Peter’s life. The club was a pioneer in its field, inspiring a series of East London jazz venues. Ask anyone who knows jazz and they will know the significance of the club and of Peter Ind.  Peter still paints and continues to write surrounded by blue paintings in his riverside home in Shepperton. Visit the website www.peterind.com for more information, for recordings and for Peters art.

Just around the corner from Shepperton Studios is the beautiful church of St Mary Magdalene, Littleton. It was founded in… END_OF_DOCUMENT_TOKEN_TO_BE_REPLACED