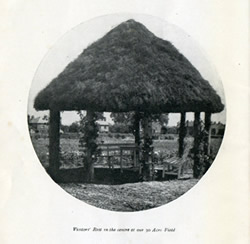 Visitors’ Rest at the centre of the
30 Acre field of Rose Acre Nurseries.

The Rose Acre Rose Nursery once occupied a large area off the Laleham Road in Shepperton, between Sheepwalk and Fairview Drive.

The site is now a housing estate with road names including Rosewood Drive, Briar Road, Bush Road and Roseacre Close. This nursery always had a particular interest for me, as my grandfather, Frederick Pollard, worked there in the 1920s and early 1930s. Indeed, my father, Dennis, was born and lived the first 4 years of his life in a cottage at Pool End, which was at the back of the nursery and came with the job. (The cottages no longer exist, and the town houses near the width restriction in Sheepwalk now occupy the site).

The nursery also included the area of the present Saxon Primary School. This is in turn named after the Saxon burials which were excavated when the school was being built in the 1960s. They formed part of an extensive Saxon cemetery which ran roughly along Sheepwalk, and my father remembered that when he was a child, his neighbour dug up a skeleton in the back garden – just the kind of thing a small boy would be sure to remember!

A little while ago I found on a well-known online auction website, a catalogue published by R. Murrell of Rose Acre Nursery dated 1927-28, just the time when my grandfather was working there (my father was born in 1928). It is entitled ‘My Favourite Roses and Why’, and lists 200 varieties of rose grown at the nursery, in order of popularity with the public – in other words how many of each had been ordered the previous season – at 1 shilling and sixpence (7½p) each! In addition to this rather unusual method of listing, there are equally idiosyncratic comments on rose growing and the rose trade in general by Mr. Murrell.

Unlike today, most roses would have been lifted from the fields and sold as wrapped bare roots in autumn, with only a minority of more established plants sold in pots. In passing he mentions that the nursery extends to 40 acres, and that his first catalogue was issued in 1912, having begun growing roses as a hobby. Visitors were welcome during working hours of 8am to 6pm, and 1 pm on Saturdays.

Of particular interest is that there are photographs of the nursery in the catalogue, one of which I attach to this article. It shows a thatched shelter at the centre of the nursery, in the background are houses in Laleham Road.
I have no information on when the Rose Acre Nursery closed, certainly it was gone by the mid 1960s when the land was sold for development. If any reader has any more information I would be pleased to hear from them.

The next public meeting of the Sunbury and Shepperton Local History Society is on Tuesday 21st January 2014 at Halliford School, when the subject will be the artist J.M.W. Turner and his paintings of the Thames Valley – including Walton Bridge.

Just around the corner from Shepperton Studios is the beautiful church of St Mary Magdalene, Littleton. It was founded in… END_OF_DOCUMENT_TOKEN_TO_BE_REPLACED