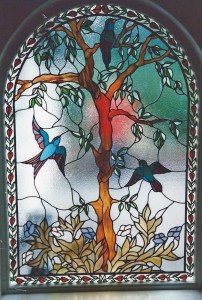 Dropping off Shepperton Matters around the village recently, I popped in to Haywoods Glazing and had a chat. I didn’t realise what a chemistry lesson it would be!

The process of making glass has apparently not changed that significantly from how it was originally made. It is of course made out of sand, which took me by surprise when I first heard it. I didn’t realise that it used to be floated on mercury when it was originally made, which is where the uneven density and the wavy lines came from. These days it is pressed so it is nice and even, and workers no longer suffer from many of the ailments caused by exposure to nasty chemicals.

You can get all sorts from Haywoods, from glass for windows, to splash backs for a kitchen to sand blasted etched panes and everything in between. What interested me though is that in Shepperton the delicate art of stained glass is still alive and well. They have a file full of photos of their work created over the years. The most unusual request dealt with was for a round window with a large eye in stained glass, peeping over at the neighbour, although the numbered hall window (WHAT DO YOU CALL THAT???) in black and white for the Newcastle United fan also made me smile! One very ornate piece is a hallway window in a Shepperton house designed by Jenny Blanc with inspiration from William Morris.

The frame of the piece alone has over 1000 pieces of hand cut glass which are all set in lead. The colours are achieved by different chemical mixes. In days of old the colour palette was restricted to red, blue, green and lilac. Red is achieved by adding gold and green was from copper. Nothing so exotic these days, but the colour-range is far wider.
You may not realise it, but you have probably seen Haywoods work when you sit down with a pizza on a film night. They have created stained glass for Shepperton Studios over the years used in films such as Sherlock Holmes, Snow White and the Huntsman and Skyfall. It must be gutting to see your work destroyed in explosions on screen though!

It is great hearing about such a skill being practised off the High Street. What is the future for such a craft though? It is a question of passing on this knowledge to the next generation. So what next? One wonders…

Just around the corner from Shepperton Studios is the beautiful church of St Mary Magdalene, Littleton. It was founded in… END_OF_DOCUMENT_TOKEN_TO_BE_REPLACED