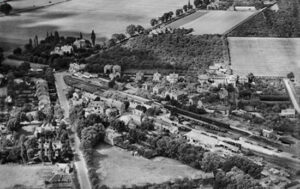 The railway had come to Shepperton in 1864, but by the time of this photo in 1928 it had been converted to run electric trains for 12 years. The new trains, such as the one seen in the photo, offered a faster, cleaner journey, and when they were first introduced, passengers would let a steam hauled service go by to make sure they boarded a nice new electric train!

The more efficient service to London was to lead to still more house building for commuters in this area between the wars – to the right of the photo roads such as Marion Avenue and Lois Drive (named after the daughters of the builder) would soon be developed. The fields beyond the Laleham Road, at the top of the photo, are now the site of Manor Farm Avenue and Barton Close. Alongside the railway sidings can be seen the shed-like buildings of the Ferro-Concrete works, which produced the ubiquitous concrete fencing panels of the period.

‘Old photos of Hampton Court Palace’ will be the subject of the Sunbury and Shepperton Local History Society meeting at Halliford School, Russell Road, on Tuesday 15th October, starting at 8pm.

Just around the corner from Shepperton Studios is the beautiful church of St Mary Magdalene, Littleton. It was founded in… END_OF_DOCUMENT_TOKEN_TO_BE_REPLACED