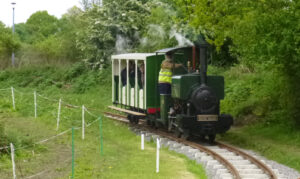 The first part of the Hampton & Kempton Waterworks Railway – the Hanworth Loop – is now operating every Sunday until the end of August The line is in “Hanworth”, not far from ‘Jobs’ Dairy by the elevated section of the A316. The first train is at 10.30 and the last train is at 16.00 hrs. The fares are £2 for adults, £1 for children, £5 for a family (up to 3 children), and no-charge for toddlers.

But if you thought that this major step forward would cause the members of the Metropolitan Water Board Railway Society, who created this Railway, to rest on their laurels, you would be mistaken. And anyway if you ‘rest on your laurels’ you are wearing them in the wrong place!

The ultimate aim is to re-create the Railway from Hampton to Kempton and the next step is to branch out from the Hanworth Loop towards the Portlane Brook and under the A316. The land for the Railway, all the way to Hampton, is all under the control of Thames Water, and you may have seen that it was Martin Baggs the C.E.O. of Thames Water who cut the ceremonial tape on the 16th June to officially open the Railway; so we have some reason to believe the Thames Water will be agreeable to our ambitions. However there are many bridges to cross, both metaphorically and literally, before we can get to Hampton, but we are already surveying the first branch off the Hanworth Loop and re-furbishing the all-important junction-point to start the rails towards the Portlane Brook, where we will cross our first bridge!

So if you wish to see how we are getting on, ether visit us in person, and enjoy a ride around the Hanworth Loop, keep your eyes peeled for further articles in Sunbury/Shepperton Matters, or visit our website www.hamptonkemptonrailway.org.uk, or, better still, join the Metropolitan Water Board Railway Society and help us get to Hampton, sooner rather than later.

Just around the corner from Shepperton Studios is the beautiful church of St Mary Magdalene, Littleton. It was founded in… END_OF_DOCUMENT_TOKEN_TO_BE_REPLACED