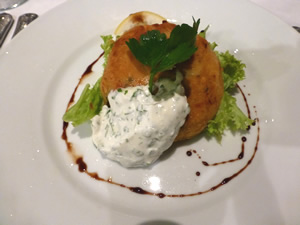 Sunbury & Shepperton Matters was recently invited to sample the fayre of the Warren Lodge in Church Square, old Shepperton.

It sits in the delightful location of the historic square on the banks of the Thames, opposite Desborough Island. It doesn’t get much better than that and I can imagine happily whiling away the hours in the sunshine with a glass of something cold, watching the sailing boats and the birds on the river. March was arctic however, so those delights will have to wait!

The hotel was bought in the 60’s by current proprietor Alison Gordon’s uncle, who added two buildings to create the large hotel that you see today. With the world famous Shepperton Studios just around the corner, many world famous actors and musicians have stayed or dined at the hotel including Laurence Olivier, Kirk Douglas, Cliff Richard and The Who. When you visit the Warren Lodge you may be walking in the footsteps of Cardinal Wolsey, Lord Nelson or even, the master of walks, John Cleese!

We were welcomed warmly by Events Director Alison Gordon and Hotel Manager Ryan Docherty (photo at top) and elected to go straight through to our table in the panelled restaurant. It is traditionally furnished with luxurious heavy curtains and crisp linen table cloths, with fresh Gerbera flowers on every table and candles burning in the windows. We looked out over Church Square where the lights were twinkling in the dusk. It was very cosy. The menu is traditional English and not confusingly large! Mr C chose the Ardennes pâté with Melba toast.

I went for the crab and chilli cake which was served with coriander mayonnaise. These were so popular that the chef had to whip up a fresh batch. So we nibbled on the homemade breads and olives while we waited. They were a lovely touch.

Both dishes were well presented and very appealing. I enjoyed a glass of the house red with my meal. The house wine should be the gauge of an establishment and this Merlot from the Veneto region was really very good. There is a good selection of wine by the bottle and prices start at under £16.00.

Mains arrived. Mr C had the fish and chips and declared the fish “glorious”. Indeed it was! Fluffy tender fish and crunchy light batter. I had the calves liver and mash with delicious crunchy shards of bacon and a huge portion of freshly cooked seasonal vegetables. On the menu are also other traditional choices such as bangers and mash, steak and chips, pan fried fish and of course burgers! I loved the tongue in cheek mention regarding the beef burger “No horse in this burger!” which is typical of the warmth of service of the staff.

Dessert choices are also traditional English, from crumble, cheesecake, sticky toffee pudding, to ice cream and cheese and biscuits. Mr C and I opted to share an orange and chocolate bread and butter pudding. It was enormous and more than enough for two! The Warren Lodge caters for every kind of special occasion including lunch or dinner parties, christenings and birthday parties. They are a popular venue for all the main celebration days; Mother’s Day, Easter, New Year’s Eve and Christmas. It is very popular as a venue for wedding receptions. The Anchor Hotel opposite (part of the same group) is licensed for wedding ceremonies. The Warren Lodge Garden room can host a seated dinner party for up to 70 guests or a buffet style party for up to 130 guests. This room has the major draw that it opens out onto a beautiful terrace with a heated awning in a spectacular location.

There is a lunch menu for lighter bites (sandwiches, paninis, jacket potatoes in addition to popular mains such as fish and chips and burgers) which can be enjoyed over-looking the river, weather permitting.
The Warren Lodge has 50 bedrooms and has been voted No 1 amongst Shepperton hotels on Trip Advisor.

Just around the corner from Shepperton Studios is the beautiful church of St Mary Magdalene, Littleton. It was founded in… END_OF_DOCUMENT_TOKEN_TO_BE_REPLACED